Until recently, the only method for freezing oocytes was a slow-freezing method.  Unlike sperm, which has been successfully frozen and used for years, eggs contain a great deal of water, which makes freezing more difficult.  When the eggs are frozen, ice crystals can form within the egg.  These ice crystals can destroy the cell’s structure.

To help minimize the amount of ice crystals, scientists would remove some of the water as the egg was slowly frozen.  But it’s impossible to remove all the water, and they couldn’t prevent the formation of some ice crystals.  The fertilization and pregnancy Vitrification is a specialized freezing technique, which freezes the egg so quickly, ice crystals don’t have time to form.

Embryo freezing is still the preferred technique for fertility preservative, but this new technique is being used for young or single cancer patients, who don’t want to use a sperm donor.  Egg vitrification is still considered to be experimental.
Posted by ivfsurrogacyindiadelhi at 05:19 No comments:

Do you want to Adopt ?

Posted by ivfsurrogacyindiadelhi at 01:02 No comments:

Email ThisBlogThis!Share to TwitterShare to FacebookShare to Pinterest
Labels: Adoption

3 Embryos in IVF doesn’t up odds of Pregnancy 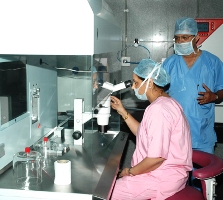 A new study of fertility treatment found that women who get three or more embryos have no better odds of having a baby then those who get just two embryos. They have a greater chance of risky multiple births.

“Women who have gone through infertility treatment want the best chance of having a baby, but we need to explain that the data shows transferring more embryos doesn’t actually do that, ” said Scott Nelson, head of reproductive and maternal medicine at the University of Glasgow, who co-authored the study published in Thursday’s issue of Lancet.

In Western Europe, where some countries pay for in-vitro fertilization many authorities recommend a single embryo transfer for women under 37 and a maximum of two embryos for women 37 to 40. For women over 40, three is often the limit by law.

Us, which has relatively lax guidelines and a lack of regulation, has seen a rise in multiple births, including the case of Nadya Suleman, labeled the ‘octomom’. She had octuplets in 2009 after her doctor transferred 12 embryos.

For women under 40 who had two embryos, live birth rate was 33%. With three embryos, that dropped to 25%. Nelson said it might be due to higher risk of miscarriage in a multiple pregnancy and that miscarrying would jeopardize the entire pregnancy.
Posted by ivfsurrogacyindiadelhi at 04:19 No comments:

Email ThisBlogThis!Share to TwitterShare to FacebookShare to Pinterest
Labels: Embryos

Does blastcyst transfer really give an advantage?

Systematic review: - Cochrane review (2007) was done to determine if blastocyst stage ETs affect live birth rate and associated outcomes compared with cleavage stage ETs and to investigate what factors may influence this. Of the 50 trials that were identified, 18 randomized controlled trials (RCTs) met the inclusion criteria and were reviewed.
Evidence of a significant difference in live-birth rate per couple between the two treatment groups was detected in favour of blastocyst culture (9RCTs; OR1.35,95% CI 1.05 to 1.74 (Day 2/3:29.4% versus Day 5/6: 36.0%)).  This was particularly for trials with good prognosis patients, equal number of embryos transferred (including single embryo transfer)  and those in which the randomization took place on Day 3.  Rates of embryo freezing per couple was significantly higher in Day 2 to 3transfers (9 RCTs: OR 0.45, 95% CI 0.36 to 0.56).  Failure to transfer any embryos per couple was significantly higher in the Day 5 to 6  (16 RCTs; OR 2.85, 95% CI 1.97 to 4.11 (Day 2/3: 2.8% versus Day 5/6: 8.9%)) but was not significantly different for good prognosis patients (9RCTs; OR1.50,95% CI 0.79 to 2.84).
This view provides evidence that there is a significant difference in pregnancy and live birth rates in favour of blastocyst transfer with good prognosis patients with high numbers of eight-cell embryos on Day 3 being the most favoured in subgroup for whom there is no difference in cycle cancellation.
Posted by ivfsurrogacyindiadelhi at 04:22 No comments: